Artists’ Colonies in Cornwall at the turn of the C20th

Cornwall’s picturesque fishing villages, expansive beaches and rugged coastline are a great attraction for artists but, most of all, there is the exceptional quality of the light. A good deal of sunshine and the clean air enhances the light shining off the sea and the sand. When reflected from the surface of shallow water, light is also refracted up from the sea bed. Even when the sun is obscured by clouds, the Cornish light is softly diffused by mist, giving a dreamy and ethereal effect. 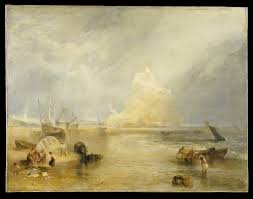 JMW Turner’s illustrated Picturesque Views on the Southern Coast of England, published in 1811, first drew artistic and tourist attention to Cornwall. A master in the art of painting light, Turner’s work suggested that the intense colours, clear light and dramatic landscapes of Cornwall bore comparison with the Mediterranean.

In the late 1870s, the railway was extended from Paddington to Penzance, allowing holidaymakers the opportunity to reach the Cornish peninsula in England’s sunny south-west corner. The mild climate was a considerable draw for artists, who were beginning to work en plein-air. At this time, the fishing and mining industries in the area were declining and fish lofts and fishermen’s cottages fell vacant as some of the locals sought employment elsewhere. The artists, who may not have had a regular income, found the accommodation affordable. They were welcomed by the local population because they rented properties and offered employment for servants and models. Before long, the word spread and groups of artists began to form colonies, most notably at St Ives and Newlyn. 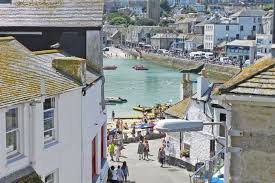 St Ives, in the far west of Cornwall, is a small seaside town with narrow cobbled streets and a pretty harbour with a wild and rugged coast.

In the late 1870s, the first tourists arrived and returned home with stories of how, on a sunny day, the colours of the sea reminded them of the Bay of Naples. In the winter of 1883, Sickert and American artist Whistler visited St Ives. By the early 1890s, it had become a popular destination for professional marine and landscape artists from all over the world. Alfred Munnings and Laura and Harold Knight worked there. Julius Olsson RA, Louis Reginald James Munroe Grier and Adrian Stokes RA settled in St Ives and set up the St Ives Art Club in 1890, where artists met with visiting architects, photographers and writers. 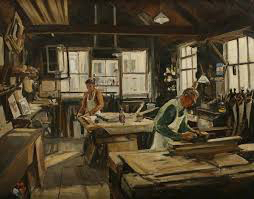 Lanham’s Gallery, in the High Street, opened in 1887, providing a display space where artists could also buy materials and have their work framed. In March, many of the artists opened their studios to the local population so they could view the canvases that were to be submitted to the Royal Academy or the Paris Salon. St Ives remains popular with artists to this day and the Tate continues to provide a focus for artists and tourists alike.

Newlyn, near Penzance on the gentler south coast of Cornwall, is less well-known. 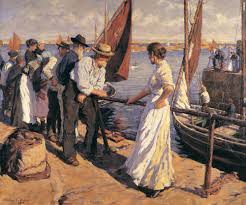 The Newlyn School, active from the 1880s to the beginning of the 20th century, was an important chapter in the history of British impressionism. The colony comprised mostly English artists but several had trained in Paris. Some had visited Brittany, where they painted outside to capture the light and, before the turn of the century, they were using a muted palette in a predominantly French Realist style. 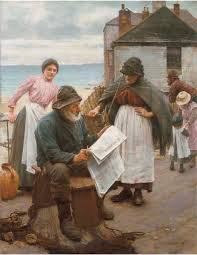 When the Boats are Away Walter Langley

The artists were interested in fishermen’s work at sea, everyday life in the harbour and the nearby villages and painted scenes of a fast disappearing way of life. They displayed their work not only in their studios but also sought sales and recognition by exhibiting at the Royal Academy. Walter Langley is generally recognised as the pioneer of the Newlyn colony and Stanhope Forbes, together with his wife Elizabeth, founded the Forbes School of Painting there in 1899. A present day Newlyn School of Art was founded in 2011, providing art courses taught by well-known artists working in Cornwall today.

Artists may come and go in Cornwall but the glorious light remains, changing from minute to minute while artists continually strive to capture its elusive beauty.

The Light Within Us is the first of the Spindrift trilogy. 1891. Deserted by her husband, artist Edith Fairchild and her friends create a thriving artists’ community at Spindrift House in Cornwall. But despite their dreams of an idyllic way of life, all is not perfect within their tight-knit community. The weight of their secrets threaten to tear apart their paradise forever . . .