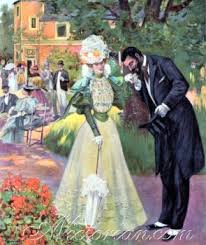 For a young woman, choosing a husband was the most important decision she, or more likely her parents, would make in her life. Marrying well was of vital importance to ensure a secure and happy future. A wife was expected to give her husband children, to support him in every way and to ensure their home was his comfortable and tranquil retreat. 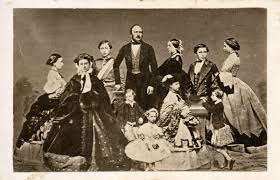 Queen Victoria and Prince Albert were determined to rise above the excesses of the Georgian court and their union set a good example of respectable marriage and motherhood to all classes. Marriages, as in previous eras, were often business arrangements.  A ‘good’ marriage wasn’t always a love match although, by the C19th, a girl’s preferences in choosing a life partner might be considered by her parents. Parent’s cautioned their daughters that passion didn’t last and wasn’t enough, alone, to ensure a successful marriage. Marriage still meant submission and dependency for a woman but, if the couple entered into the arrangement with a positive outlook, love often grew over the following years. 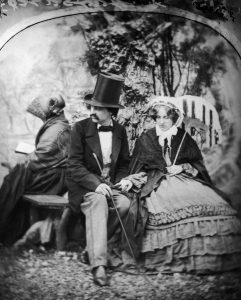 A courting couple in a London park hold hands while a chaperone sits beside them reading a book, circa 1865. (Photo by London Stereoscopic Company/Hulton Archive/Getty Images)

There were few opportunities for young people to meet freely and an unmarried girl would usually be carefully chaperoned or kept at home. It was unthinkable to marry outside the class you were born into and a girl who eloped, whatever her class, would often be shunned by her family and friends. One of a mother’s worst fears was of her daughter’s reputation being lost or, even worse, an unwanted pregnancy, which would ruin her hopes of marriage. Courtship, therefore, was largely conducted in public places with someone always listening in to the couple’s conversation. Private communications might be attempted by letter but parents saw it as their right to read such missives received by their daughters. 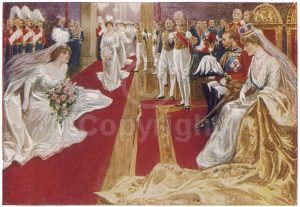 men during the Season, always carefully chaperoned to various balls, sporting events, dinners and tea parties. The highlight of the season was to be presented at Court.

Middle class girls still conducted their courtships in public and were likely to meet sons of family friends. Parents aimed to guide their daughter into a respectable marriage where the young couple had the same religious affiliations and where the young man was of the same class but had good prospects for keeping his wife in some comfort. 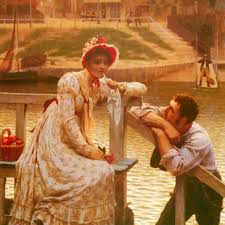 Working class girls had often left home by fourteen so there may have been less parental supervision. If a girl lived in as a servant, there would be very little time off and strict rules regarding ‘followers’. On a rare afternoon off, if she wasn’t visiting her family, she might walk in the park or go to church. Girls who worked in a factory or a shop may have had more opportunities to meet suitable,and, quite possibly, unsuitable young men.

A mother took her duty of finding a suitable partner for her daughter very seriously. Although considered ‘women’s business’, a suitor was obliged to ask the father of the intended bride for his permission to marry her.

Once an engagement was announced, the wedding followed soon after – sometimes in a matter of weeks. It was a matter of pride for upper and middle class mothers if their daughters were ‘snapped up’ before the end of the Season. There was a considerable saving of further expense if they didn’t have to parade the girl for another Season. Working class couples may have had longer engagements while the suitor saved sufficient funds to provide a home for his bride. 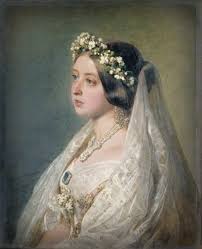 Upper class weddings were often conducted at the end of the season before family and friends retired to their estates. Queen Victoria wore a white wedding dress but it took some time for this idea to catch on. In the early Victorian period, some middle class girls may have worn white but the style would be chosen with care, so that the dress would be suitable for social occasions afterwards. Working class girls usually wore their Sunday best.

Orange blossom symbolised chastity. Wax orange blossom coronets were often worn and passed down through the generations. In the mid Victorian era, the bride wore a veil that wasn’t lifted until after the ceremony. By the 1890s, brides wore a dress with large, puffed sleeves, a train and a long veil. White satin shoes would be worn and the bride’s gloves had a slit to allow the ring to be placed upon her finger. The bride often wore jewellery given to her by the groom to mark the occasion.

Generally, weddings weren’t particularly lavish affairs, even for the upper classes. The ceremony usually took place in church followed by a small reception afterwards. Since the bride and groom often hadn’t had a great deal of time to get to know each other before the wedding, honeymoons often involved making a series of visits to friends and members of the family. For working class couples, a honeymoon might mean a day’s jaunt to the seaside. 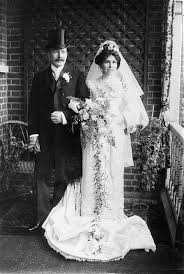 The bride may have had mixed feelings as she walked out of the church on her new husband’s arm. She had, hopefully, achieved her ambition of securing her future and raising her status as a married woman. Now she had to face the responsibilities of managing her new home and accommodating her husband’s wishes and desires. For many brides this also meant discovering the joys, or terrors, of the marital bed.

The Light Within Us, the first of the Spindrift trilogy, explores the theme of women and marriage in the late Victorian era.