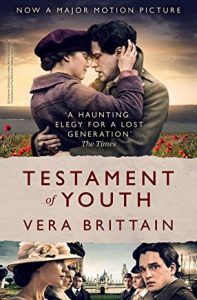 I bought this WW1 memoir because I’m currently researching for a new novel to be set during this time. Testament of Youth wasn’t published until 1933 but Vera Brittain based it upon the extensive diaries she wrote before and during the war.

This is a poignant memorial of a lost generation, contrasting the golden days just before war was declared, the horror during the war and the nightmare afterwards of realising that nothing would ever be the same again.

It’s interesting to read an account written by an initially self-absorbed young woman rather than a soldier at the front. Vera struggled passionately against parental opposition to be allowed to go up to Oxford but, almost as soon as she arrived, war was declared.

Her brother, her fiancé and many male friends and acquaintances were soon on their way to the front. As the appalling numbers of casualties grew, Vera felt unable to continue her studies and she volunteered to nurse the wounded.

Sometimes unbearably moving, Testament of Youth gives a vivid picture of suffering and loss during WWI.