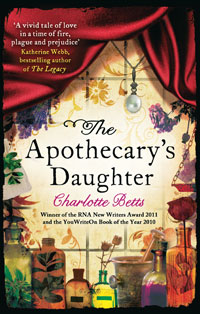 A vivid tale of love in a time of fire, plague and prejudice (Katherine Webb)

Romantic, engaging and hugely satisfying. This is one of those novels that makes you feel like you’ve travelled back in time (Katie Fforde)

A colourful story with a richly-drawn backdrop of London in the grip of plague. A wonderful debut novel (Carole Matthews)

A feast for the senses. With the sensual language of Patrick Suskind’s Perfume and the historical flavour of Philippa Gregory, this is a lush, immersive read for historical fiction fans, set during one of the most exciting eras of the city’s history (Holiday Magazine)

1665. Susannah Leyton has grown up behind the counter of her father’s apothecary shop in bustling Fleet Street. A skilled student – the resinous scents of lavender, rosemary, liquorice and turpentine run in her blood – her father has granted her the freedom to pursue her considerable talents. But Susannah is dealt a shocking blow when her widowed father marries again, and her new step-mother seems determined to remove her from the apothecary shop for good.

A proposal of marriage from the charming Henry Savage seems to offer Susannah an escape. But as the plague sweeps through London, tragedy strikes, and dark secrets in her husband’s past begin to unfold. It will take all of Susannah’s courage and passion to save herself from tragedy . . .