The Festival of Romance 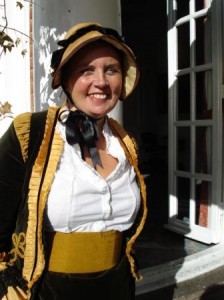 Jean Fullerton dressed as one of her characters from Perhaps Tomorrow

I’ve had a fabulous time at the Festival of Romance held at lovely Hunton Park Hotel and returned home today with my head buzzing with ideas.

Novel Openings. A number of authors read the openings of their novels and there was a lively discussion about what hooked the reader in.

The Big Debate on Men and Romantic Fiction. Do men read romantic fiction and if not, why not? Men enjoy romcom films such as Four Weddings and a Funeral, Love, Actually and Pretty Woman, so why don’t they read the books? Carole Mathews believes that pink, ‘girly’ covers put them off. It was generally thought that those men who admitted to reading and enjoying Chic Lit were concerned about what other men would think if they didn’t disguise the novel in a brown paper cover. Perhaps they would be more comfortable reading Chic Lit on Kindle or if the blurb was angled to appeal specifically to men? Roger Sanderson, successfully writing as Gill Sanderson for Mills and Boon, didn’t think it mattered what sex an author was when writing ‘women’s fiction’. Nell Dixon thought that men would read romantic novels if there was a strong element of suspense included.

Where Do you Get Your Ideas From? I was on a panel to discuss this with Jan Jones, Juliet Archer and Sophie Angemaring. Jan brought illustrations of The Rookery, a maze of narrow lanes in Newmarket, which inspired some settings in her books. Sophie works in IT and used this environment to inspire her tough female characters and futuristic settings. In complete contrast Juliet looks back in time to the works of Jane Austen which she rewrites in a contemporary vein. I talked about an old map of the city of London which, combined with a visit to Delhi, sparked off ideas for the setting of The Apothecary’s Daughter.

Author’s Fashion Show. After lunch there was an author’s fashion show, where authors dressed as one of the characters in their books. 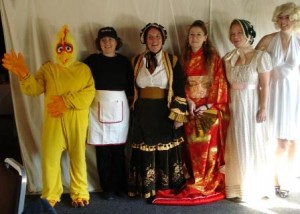 Beginners Guide to Historical Romance. Fenella Miller and Jean Fullerton talked about their favourite historical novels from prehistoric times to WWII. We all came away determined to seek out any of these that we had missed. 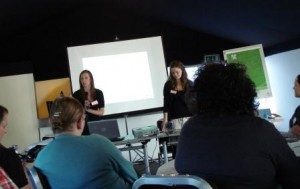 Anna Boatman and Megan Haslam of Mills and Boon

Interview with Mills and Boon. Anna Boatman and Megan Haslam are looking for talented new authors for Mills and Boon. They explained how authors could make their work stand out from the crowd by understanding what readers want and how to make them fall in love with the hero. Top tips were to be sure to include plenty of emotional conflict, sexual tension and make your heroine believable and empathetic. Open your story with a bang and show the reader that the story is unique. Stay true to the genre and stretch your imagination.

Interview with Carole Mathews. Immensely popular author of contemporary women’s fiction, Carole Matthews, talked about her early career as a secretary and beauty therapist before appearing on a television programme called Look Good, Feel Good for three years with Rosemary Conley and the Green Goddess. After she entered a writing competition she won a prize of a writing course and then wrote Let’s Meet on Platform 8.  Sixteen years and twenty three novels later she has changed both her agent and her publisher and feels invigorated. She now writes for Little Brown and produces two books a year, one for Christmas and one summer read. Her latest novel is about a heroine called Jane who goes to Africa and falls in love with her tour guide, who is a Masai warrior. Sounds intriguing!

Carol’s advice to authors is to travel when you can and go as far as the budget allows because it reaps rewards in fresh ideas. She is also very disciplined, keeping Twitter and FaceBook to the hours of 8am to 9am and then keeping office hours while she writes. Sadly, there are no shortcuts to completing a publishable novel.

Teatime courtesy of Loveswept. Delicious cupcakes were served by an even more delicious hero!

Book Fair and Festival Book Club. The Festival finished with the Book fair and signings, organised by Susan Franklin and a Book Club discussion group lead by Alison Walker on the Novels shortlisted for the Romance Reader Awards.

I have only commented on some of the workshops and discussion groups but there really was something for everyone  over the two days. Thanks go to Kate Allan and her team who worked tirelessly to make the Festival such a success. Let’s make this a yearly event!

2 responses to “The Festival of Romance”