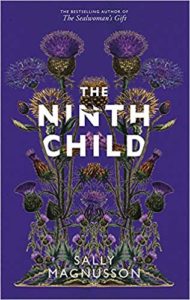 The Ninth Child is set in the Highlands of Scotland on the shores of Lake Katrine in 1854. This unspoiled area is the location for a vastly disruptive engineering project to tunnel through the mountains to bring clean water to the festering tenements of Glasgow.

Dr Alexander Aird takes up a position of ministering to the workmen injured in this dangerous undertaking. He brings with him his wife, Isabel who is grieving for her eight stillborn infants. The subject is never discussed between them and their once-happy marriage is suffering.

The story begins with a sparkling examination of the power plays within the marriages of Isabel and Alexander and also of Queen Victoria and Prince Albert, who are visiting the Highlands, illustrating a realistic picture of the irritations and joys of an established marriage.

In this wild and lonely place, Isabel attempts to navigate her grief by taking comfort in Nature. There are poignant scenes of her roaming the Highlands and imagining she catches glimpses of her still born babies living in the land of Faery on the shores of the lake. She forms guarded and unlikely friendships with rough-spoken, second-sighted Kirsty McEchem, the wife of one of the labourers and also with the gaunt and shabby clergyman, Robert Kirke. But all is not as it seems with Kirke who, over one hundred and fifty years before entered into an unholy pact with the sithichean, the faery people of the underworld. Unable to die and be laid to rest with his beloved wife until he has completed a sinister quest set by the faery people, it gradually becomes apparent that he is a significant threat to both Isobel Aird and Queen Victoria.

I read this novel as an e-book and found it disconcerting that there were few page breaks between changes in narrators. While each narrator’s interior monologue had their own ‘voice’, it often took a sentence or two to realise whose point of view I was reading. This was distracting and confusing, breaking the fictive dream state. I was gifted an Advanced Reading Copy from the publishers in exchange for a fair and honest review. Since I read an early copy, it’s possible the format has now been changed to make it easier to read.

The Ninth Child will be published on 19th March 2020 and is now available for pre-order.