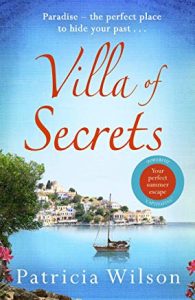 This is a dual time period story set on the island of Rhodes, partly in the present day and partly in WWII during the Nazi occupation of the island.

What I enjoyed most about this novel was the characters, especially that of Pandora, Rebecca’s ailing but stubborn and determined grandmother. As the present day story progresses, we discover through Pandora’s diaries how, as a spirited teenage girl the war destroyed her family, sending most of them to Auschwitz. Pandora, however, escapes their fate and becomes involved in the resistance movement.

The story became compulsive reading for me as I became involved in this tale of heroism, tragedy and, ultimately, love.

About the book
Rebecca Neumanner’s marriage is on the brink of collapse, as her desire to be a mother becomes an obsession. Then she receives news from her estranged family in Rhodes.

Called back to the beautiful Greek island of her birth, she realises how little she knows of the grandmother she has eluded for over a decade. Bubba has never spoken of the Nazi occupation during her youth, but there have always been whispers. What desperate measures did she take that terrible day in 1944 when her family was ripped apart? Can the rumour she had blood on her own hands really be true? But Bubba intends to take her secrets to the grave.

However, as Rebecca arrives on Rhodes, bringing the promise of new life, this broken family must come together. The time has come to tell the truth about the darkest of days . . .