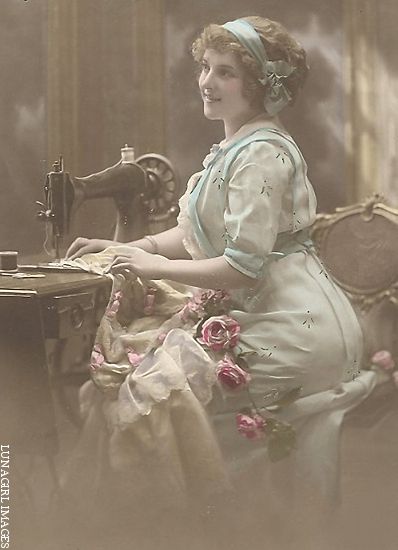 My mother taught me to use a sewing machine when I was eight years old and I began to make my own clothes straight away. At first I used my grandmother’s treadle Singer and when I was ten my mother gave me her ornate but ancient hand-cranked Singer. Mum bought a new electric machine that could embroider fancy stitches. Soon all napkins, handkerchiefs, towels, petticoats, tablecloths and curtains in the house had embroidered details!

The first detailed and patented design for a sewing machine to stitch leather and canvas was designed by an Englishman, Thomas Saint, in 1790. There’s no record of a prototype model but later, in 1874 William Wilson built a replica from the detailed drawings, worked by a hand crank. 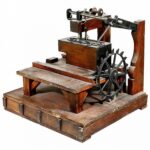 In 1830, after many unsuccessful attempts to make a reliable sewing machine, Barthelemy Thimonnier, a French tailor, invented a model that used a hooked needle and one thread, creating a chain stitch. After patenting the machine, Thimonnier opened the world’s first sewing machine based clothing factory. Other French tailors were so incensed that they might be put out of work, they burned the factory down with Thimonnier inside.

1844, English inventor John Fisher designed an efficient sewing machine but the Patent Office lost his drawings and he didn’t receive any recognition for his work.In 1845, however, an American, Elias Howe produced a sewing machine very similar to Fisher’s but with some improvements. Howe’s machine had a needle with an eye at the point and used thread from two different sources. A shuttle slipped a second thread through the loop made by the needle and created a lockstitch.

Fisher couldn’t sell his design so he sailed to England to look for a new market. After a lengthy stay, he returned to America to discover that his lockstitch mechanism had been copied by others, including Isaac Merritt Singer. Singer built an empire that still exists today. He built beautifully engineered machines, including the first version of the modern day sewing machine, which was worked by a foot pedal.

William Jones started making sewing machines under license to Howe and Wilson in his factory in Ashton-Under-Lyne, later setting up a new factory in Manchester in 1869. In 1893 the company was renamed the Jones Sewing Machine Co Ltd and was subsequently bought out by Brother Industries in Japan in 1969.

Sewing machines were initially used by clothing manufacturers but by 1869 became available to the domestic consumer. They were very popular with middle class families to make and mend clothing and household textiles. Home dressmaking allowed women to make clothes for themselves that they could not afford to buy, thereby negotiating wider social shifts. 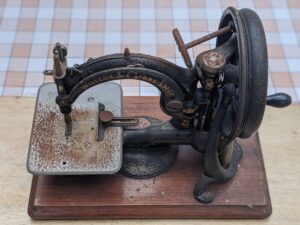 My family was given an antique Wilcox and Gibbs sewing machine, complete with accessories and storage box, by an elderly neighbor a few years ago. This company was set up in 1857 but still produces commercial sewing machines.

My hand-cranked Singer machine was perfect for learning to sew because there was little risk of it going too fast and stabbing the needle through your fingers. I used this machine all through my teenage years and was fascinated by the process of turning a length of cloth into something beautiful to wear. In the beginning I used bought paper patterns but soon graduated to making my own and went on to train as a fashion designer.

At college I used factory standard electric machines and professional overlockers. Later, in my early twenties, I was given an electric Frister Rossman and made my own wedding dress, most of my own and my children’s clothes and all curtains and loose covers for most of the houses I’ve lived in. Modern sewing machines are probably more efficient but I still remember the peaceful whirr of my hand-operated Singer with great affection.