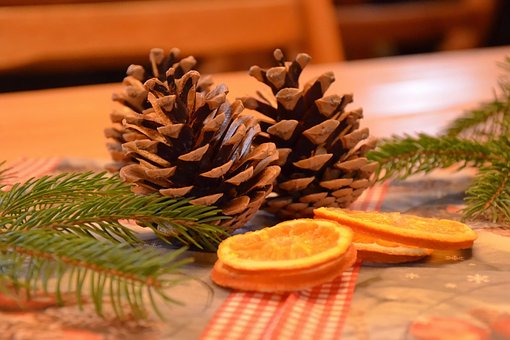 Since Christmas is nearly here I thought you might like to read an excerpt from The Apothecary’s Daughter, which takes place on Christmas Day 1665, the year of the plague.

Christmas day dawned fair and clear. Susannah scraped the ice off the inside of the bedchamber window and peered out at the snow-covered courtyard below. Frost had touched the trees with wintry fingers and the pale sun sparked diamonds off the tracery of branches.

‘Henry? Come and see! I hoped it would snow; the sky had that heavy, yellow look yesterday.’

Henry groaned and turned over. ‘Too much wine last night.’ He pulled the covers back over his head.

‘Come on, we have lain in bed far too long already. I still have preparations to make for the dinner and we mustn’t be late for church. ‘

‘You’re always busy,’ Henry sighed. ‘What you need is some more help with the housework.’

‘I’ve been telling you that for weeks!’

‘In fact,’ suddenly his eyes were alight with enthusiasm. ‘What you need is a house slave.’

‘No doubt! Meanwhile, if you’d help to carry the coal upstairs once in a while I’d be happy.’

It took a great deal of chivvying to get Henry dressed but they arrived at the church in time to nod at faces they knew. The young parson gave a very dull sermon and Susannah’s thoughts began to drift. She had looked forward to this day all month, polishing the house from cellar to attic and planning the feast. The jollity of the Christmas celebrations was exactly what was needed to dispel the winter gloom and it was to be quite a party. Cornelius, Arabella and the children had been invited, along with Henry’s Aunt Agnes and William Ambrose as well as Martha and her family.

Henry’s head began to nod as the sermon went on and on. Susannah prodded him every time his breathing threatened to turn into snores and he shook himself upright again while she ran over in her mind the list of things she had to do before their guests arrived. Peg had been left in charge of the spit and she hoped that she wouldn’t let the leg of beef or the capons burn.

At last the congregation filed outside. Already the snow was touched with black smuts from the soot-laden air. It was too cold to linger more than a few minutes to wish the other church-goers a merry Christmas before they returned home.

The house welcomed them with the smell of roasting beef and Susannah was relieved to find that Peg had managed to keep the meat basted and that the plum pudding was steaming merrily away.

‘I’ve roasted the apples in ale just like you said and the jelly is setting outside on the window sill,’ said Peg. ‘And before you ask, I remembered to cover it against smuts.’

‘Well done, Peg! I can see that you have everything in hand.’

Upstairs, the great table in the dining room had been polished to a high shine and all the carved chairs would be used for the dinner that day. Susannah had decorated the table with bunches of rosemary and berried holly and the best glasses and linen. She had fixed beeswax candles into Agnes Fygge’s candelabra and had wrapped it around with trailing ivy.

She looked around her with satisfaction. Fires burned in every room in the house and a bunch of mistletoe hung in the hall. The stairs were garlanded with greenery, which perfumed the air with a pleasant resinous scent. Everything was ready. Surely Henry would be proud of her achievements? She smiled, imagining him taking her in his arms and telling her that he loved her. She wanted that more than anything. At that moment the door knocker sounded, heralding the first guests.

After they had rolled away from the table full of plum pudding and sweetmeats, they played Blind Man’s Buff and then Martha’s husband, Josiah, took out his fiddle and started to play a country dance tune. Susannah’s foot began to tap and Henry took her by one hand and Martha by the other, calling to William to join them. Soon everyone, except Agnes who was too crippled and Arabella who was too pregnant, had joined in. The children whooped in excitement as they became so giddy with twirling around that they fell over into a tangled, screaming heap.

‘There will be tears if they are allowed to run wild,’ said Susannah. ‘I shall call for Peg to take them into another room to amuse them for a little while.’

Once the children had gone, Josiah played a slower and more refined French tune. The men faced the women in a line and each bowed, shook his dance partner by the hand and kissed her cheek before moving on to a new partner. Arabella allowed herself to be led onto the floor by Cornelius and in spite of her bulk she swept across the floor like a stately galleon. The clip and scrape of leather shoes upon the wooden floor and the swish of silk skirts was curiously soothing as the dancers concentrated upon their steps. Susannah found herself facing William Ambrose who moved more gracefully than she would have expected, barely touching her fingertips as he shook her hand and turned her around.

‘I haven’t enjoyed a Christmas celebration as much as this since I was a child,’ he murmured. ‘And it was kind of you to ask Aunt Agnes. She does so love a party. There is little enough fun these days.’

‘I miss going to the playhouse now that all the theatres are closed. My father took me to see Ben Jonson’s Volpone at Drury Lane last year.’

As he kissed her cheek before moving on Susannah noticed that he carried with him the sweet scent of rosemary and freshly ironed linen. She lost the measure of the steps for a moment and was relieved that her father was her next partner and he held her steady until she found the rhythm again.

Darkness was falling when the sound of singing drifted up from below. The guests leaned out of the window and watched the carollers stamping their feet in the snow while they sang and when they had finished, threw down apples, nuts and coins for them. Susannah sent Peg outside to bid them come into the hall and warm themselves by the fire and take a glass of punch. Guests and carol singers sang a round of We Wish You a Merry Christmas and I saw Three Ships Come Sailing In before the carollers continued on down the street.

‘We must leave you too,’ said Cornelius. ‘The children are becoming fretful.’

One by one the guests left and finally only Susannah and Henry remained.