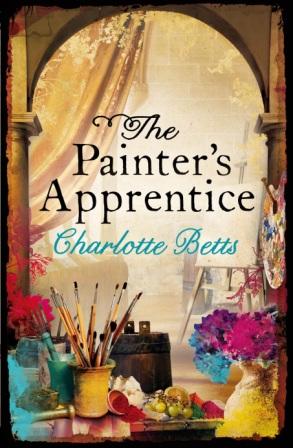 The Painter’s Apprentice is a follow on but stand-alone sequel to the e-book bestseller, The Apothecary’s Daughter.

Set at the time of the Glorious Revolution, when England is still beset by religious rivalries, this is a highly-recommended novel of love, tragedy and the power of art (Daily Mail online)

Beth, a gifted botanical artist, declares she will never marry since she intends to dedicate herself to her art. But then her cousin Noah arrives from Virginia and sparks off a chain of events which change her life forever. She makes friends in high places and, against a back ground of rising political unrest, she plays a small but crucial part in the Glorious Revolution and so alters the course of history.

Darkness had already fallen when shouts and then the sound of a whistle blown three times made Beth’s head jerk up from her easel. Her paintbrush slid from her hand and fell unheeded to the floor. Instantly alert, she reached for her own silver whistle, which always hung around her neck. Noises in the night were not unusual in a lunatic asylum but generally the disturbance came from within the walls, not from the outside.

Several sets of footsteps raced along the gallery and in the courtyard below Orpheus began to bark as furiously as if the Devil himself had knocked at the gate. Beth pushed open the casement and hung shivering over the sill to peer into the frosty night.

The servants had run outside with lamps and there was a throng of shouting people milling around in the flickering light. The commotion was too great for anyone to hear when she called down to them so she hurried to investigate.

Joan and a small group of anxious inmates huddled together, while Beth’s mother and her youngest brother, John, attempted to reassure them. Orpheus still raged outside, his barks reverberating around the courtyard louder than a peal of bells in a belfry.

Beth caught sight of her father’s black-clad figure striding purposefully across the hall and ran after him down the front steps and into the courtyard.

‘Orpheus!’ William Ambrose caught hold of the wolfhound’s collar and pulled his big grey head around to face him. The dog’s teeth were bared in a vicious snarl and spittle frothed his muzzle. William snapped his fingers. ‘Quiet, sir! Your job is done!’ Orpheus gave a throaty growl and William raised a warning finger. ‘Beth, take control of this hell-hound, while I find out what is happening.’

‘Yes, Father.’ Beth hooked her fingers through the dog’s studded collar and tickled his ears until he quietened.

Emmanuel and Joseph, the Steward, had a man pinned between them, his face pushed between the bars of the great iron gates. The prisoner fought furiously but he was no match for the sheer bulk and strength of the two black men.

‘Let him go!’ William’s voice rang out over the grunts and shouts of the struggling man.

‘We found him climbing over the gate,’ said Emmanuel, the whites of his eyes gleaming in the lamplight.

Emmanuel looked at Joseph and winked. Slowly, they lowered the intruder, chuckling as they held him so that his feet hung just above the ground.

William held up the lantern to study the trespasser, who straightened his travelling cape, adjusted the lace at his cuffs and turned to face them.

The light illuminated a young man’s features, currently arranged in a scowl.

‘Well, Sir, what have you to say for yourself?’ A frosty cloud of William’s breath hung in the air between them but it wasn’t as wintry as the tone of his voice.

Beth didn’t envy the intruder. It had been a while since Father has spoken to her in that way and she sincerely hoped it would never happen again.

‘Forgive me, sir.’  The voice was that of an educated man but he didn’t sound at all as if he was seeking an apology. Bending over, he picked up his wide-brimmed hat, now severely trampled, dusted it off, tweaked the feather back into shape and replaced it upon his head. ‘I lost my way. The cart dropped me off in the village and some mischievous child thought it amusing to direct me to the wrong road. By the time I’d found someone to point me to Merryfields it was dark.’

Beth was astounded at how unruffled he sounded. He certainly didn’t behave like a common thief.

‘I rang the bell,’ the young man continued, as he stamped clods of mud off his high boots, ‘but no one answered. Since the gate was locked and the hour so late, I took the liberty of climbing over the top, intending to knock on the door.’

William frowned. ‘And the purpose of your visit?’

‘I have a letter for Mistress Susannah Ambrose.’

‘Then you must be Doctor William Ambrose?’

The young man tilted up his chin. ‘I prefer to speak directly to Mistress Ambrose.’

Beth saw how the visitor, only a little older than herself she judged, met Father’s stare and couldn’t decide if he was fearless or simply arrogant.

William grunted. ‘You had better come inside before we all catch a chill.’

Joseph, his keys jangling at his waist, held the lamp up high and spoke to the servants. ‘Back to your duties, everyone.’

Orpheus growled again. Beth pulled on his collar and patted his wiry head.

William led the way up the steps and into the hall.

Shivering, Beth closed the massive oak door behind them and shot the bolts.

‘Susannah, my dear,’ said William, ‘this young man brings you a letter.’

Beth’s mother, her pretty face anxious, let go of Poor Joan, who had been weeping on her shoulder and came forward. ‘A letter? But what was all the shouting about?’

‘The servants merely became overexcited when they thought our visitor was an intruder.’

‘Well, for goodness sake!’ Exasperation showed in Susannah’s green eyes. ‘What a fuss about nothing!’

‘Let me present …’ William turned to the visitor, with an enquiring look.

The young man took off his battered hat, exposing a fine head of wavy chestnut hair, and bowed low to Susannah.

And then, almost before her husband could catch her, she fainted.

26 thoughts on “The Painter’s Apprentice”