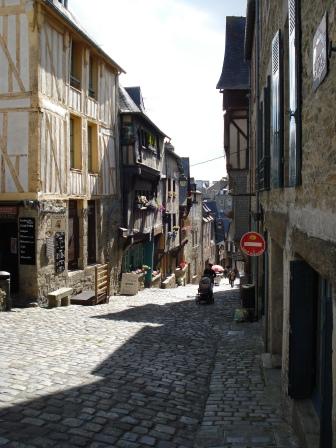 I’ve recently returned from a week’s holiday in Brittany. The weather was cold and wet, even though it had been sunny and warm for weeks before we arrived! We rented a little cottage with a large garden in a village with a fantastic baker and interesting Roman remains. The weather didn’t matter too much as the cottage had a garden room, which I immediately commandeered as my writing room. The wet weather was something of a blessing in disguise as it didn’t distract me from concentrating on the first draft of The Painter’s Apprentice.

I didn’t quite complete the first draft while I was away but on my return, after several very late nights and early mornings, I am hugely relieved that I have now completed it. I haven’t yet read it through and it’s far too long at 150,000 words but it is down on paper. What a relief!

The manuscript has been sent out to my writers’ group and at the next meeting in the middle of July I shall be waiting nervously to find out what they think of it. One of the best things about WordWatchers is that they will tell me honestly, but kindly, if it’s rubbish. The discussion will be lively as they dissect it and put it back together again and I will come away with ideas on ways to improve it. This is incredibly valuable and if some of you writers out there don’t belong to a group like this , I strongly suggest you start one!

I’ll continue to edit the first draft until the end of July when I will send it to my editor at Piatkus. Then I’ll be really nervous while I wait while she reads it.