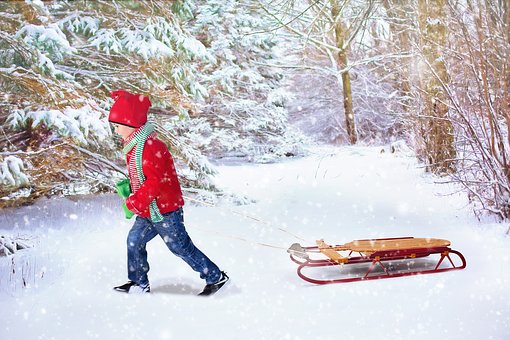 My younger brother and I grew up during the fifties and sixties and some of our happiest memories are those of Christmas. The celebrations began on Stir-Up Sunday. Silver sixpenny pieces were carefully mixed into the pudding and I’m surprised there was any pudding left after we finished ‘helping’!

The festive season was far less commercial then and we used to spend weeks planning and making presents for our friends and family. I’ve lost count of the number of felt needle-cases, pipe-cleaner holders, bookmarks, pomanders and Radio Times covers I made. The grannies, grandpas and aunties were always properly appreciative of these small items made with love. ‘It’s the thought that counts,’ was the oft-repeated mantra as the gift was unwrapped.

I was good at sewing but useless at knitting and my brother found it hard to put on a grateful face one year when I presented him with a fashionably narrow moss stitch tie that had an odd kink half way down. I’m not sure it had many, or indeed any, outings.

One of my favourite presents was a wonderful ocelot faux-fur gilet that my mother made. I loved it and wore it with the scarlet eight-panelled skirt I’d made at school, feeling like a film star! 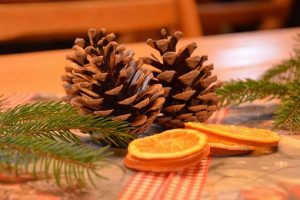 And then there were the decorations. Painted Chinese lanterns in bright colours and with long tassels underneath were hung from the light fittings. The house would be swathed from top to bottom with paper chains, not the expensive, pre-glued ones bought from a shop but cut up from newspaper or old magazines, stuck together with flour and water paste and sprinkled with glitter. Mum would still be vacuuming up the glitter in July.

My father would take us out to choose the tree and we’d wedge it in a coal bucket disguised with red crepe paper. Then the box of glass baubles and tinsel would be brought down from the loft. We used to clip red candle-holders made of pressed tin onto the Christmas tree and someone always had to remain in the room on fire duty whilst they were lit. There were no ‘Elf and Safety’ rules then, only common sense. Once the tree was decorated, my brother and I would fight to be the one to stand on a chair and place the battered fairy on the top.

Begging letters to Father Christmas were written on sheets of Bronco toilet paper (also brilliant as tracing paper) so that they were light enough to float up the chimney with ease. By five in the morning on Christmas day we were nearly exploding with excitement when we raced downstairs. We squealed with delight when we saw that Rudolf’s carrot had disappeared and the mince-pie crumbs and empty sherry glass on the hearth meant that Father Christmas had visited us during the night.

My brother always tipped his stocking presents onto the floor in a heap and rummaged through them while I pulled each treat out one by one, hoping to make the pleasure last. There were puzzles, crayons and notebooks, those wonderful Japanese flower gardens that grow when you put them in water, a yoyo, a book, a shiny new penny and, my particular greedy favourite, a tin of mandarins and a tin of cream that I was allowed to enjoy all by myself. 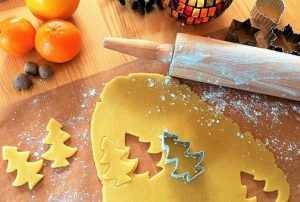 Our parents and Granny, yawning in their dressing gowns, would come downstairs and we were allowed to open our main presents before breakfast. We’d spend hours with a box of Fuzzy Felt, some new Meccano or daydreaming about the endless possibilities of a £2 postal order or a book token. There was nothing on television in the mornings in those days and we amused ourselves with our new toys or books until it was time to lay the table for lunch.

The turkey was carried in from the steamy kitchen with great ceremony and carved at the table, the breast pronounced deliciously moist and the roast potatoes crisp. Then my father would ignite the pudding with brandy, invariably setting the sprig of holly on fire. Trifle, nuts, dates and tangerines were offered to anyone who had room for them. After lunch we’d sit by the fire and turn on the television for the Queen’s speech, watch a film, squabble over Monopoly or read our new books until it was time for turkey sandwiches and Christmas cake. I used to hide the icing, peel off the marzipan and eat it in one delicious chunk.

Slightly queasy with over-indulgence, bedtime was always bitter-sweet with the realisation that it would be a whole year before we would be able to enjoy such a wonderful day again. On Boxing Day Mum always made us sit down to write our Thank You letters and then we knew then that Christmas really was over for another year.

8 responses to “My Christmas Memories”