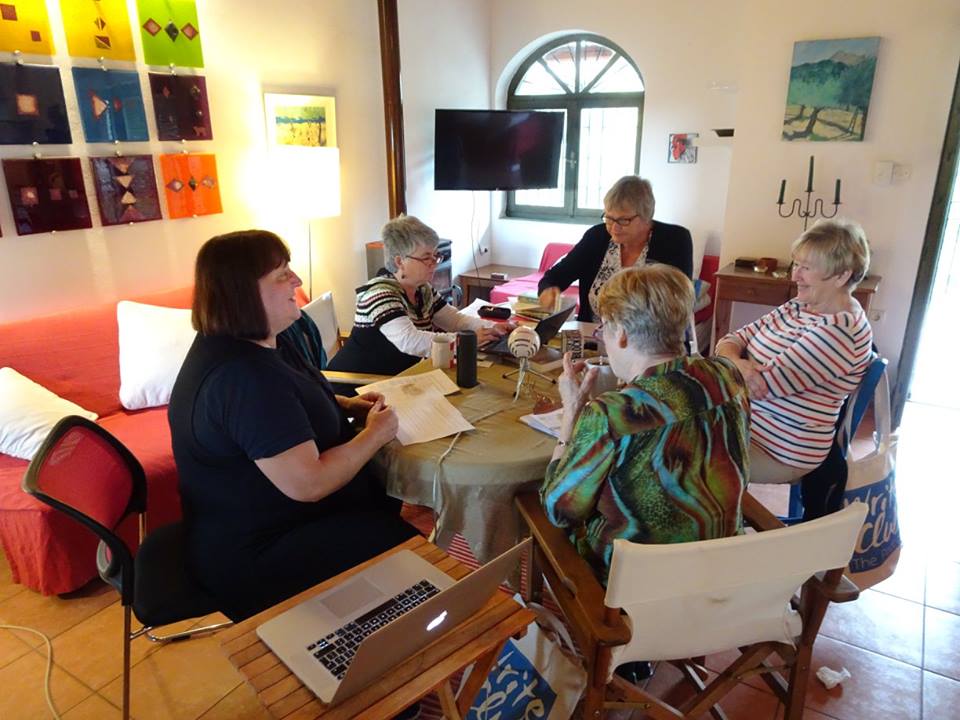 This month I was invited by Theresa Stoker to be a guest on Write Club – The Podcast to talk about my writing.

I first met Theresa a few years ago whilst staying with a mutual writer friend in Greece. Theresa is not only a  writer but also a fiendishly clever Scrabble player, as I discovered when she had the misfortune to partner me in an ex-pats tournament.

Theresa and a group of her writing friends have started an interesting new venture – podcasts for writers. So allow me to introduce Theresa to tell us more about Write Club.

Hi Charlotte! Traditionally we imagine writers starving in an attic and wrestling with their muse in isolation. True, writing is essentially a solitary pursuit, but the support and encouragement of other writers can help you improve your writing and boost your morale. It can be hard, though, to find like-minded people, especially if you move to a new area. But even in rural Greece, I have been lucky enough to get involved in not one but two active writers’ groups.

The first came about through talking to friends and deciding to meet regularly and critique each others work. At first we were very polite, but pretty soon realised we couldn’t develop the skills we wanted if all we did was praise each others efforts. There is a knack to critiquing. We always find something positive to say, and give each other lots of encouragement, but we do point out the things that don’t work, the flabby bits of writing and the clichés. It’s in the nature of the ‘foreign’ community that people come and go. This was always a loose, flexible group and we continue to meet on an ad hoc basis, though the membership has gone down a bit. As well as love, friendship and literary criticism, I got a comedy play about an ex-pat writing group from these meetings.

Then last year I was invited to join a newly formed group called Write Club. I almost said no, because this group had rules! Not just rules, but pages of them. Well, the rules very quickly went out of the window, mostly, but Write Club remains a much more organised bunch of people.

One of your Write Club members calls the podcasts ‘Loose Women with books.’ What prompted you to start making podcasts?

The idea for Write Club The Podcast came when we tried to find a good podcast about creative writing and really couldn’t find one that met our needs. We wanted to try to keep the feel of our Write Club meetings while creating an online community of writers, aspiring writers and readers. One member describes it as like ‘Loose Women with books’. We launched in December 2017 and have already had 1.5 thousand listens. We have had positive responses from people who say we’ve inspired them to start writing again, which is really gratifying.

We’ve got a lively Facebook group of nearly 400 members. We’re trying to get our audience more involved by asking them to record their own book reviews and short items. Modern technology makes it so easy to record on a phone or laptop and email the resulting file to us. With feedback from listeners in Europe, Asia and North America, it really is beginning to feel like a global village.

The technical aspects of recording, editing and sharing the podcast have been a challenge to me personally, but it’s one I’m enjoying. We’re not broadcast professionals, and I’m sure that shows, but we are having fun and sharing our journeys as writers. We don’t pretend to be experts and we make mistakes which we don’t always edit out. Sometimes producing the podcast feels like a full-time job, and I have to remind myself to make time to actually write. I’ve invented a new word, podcrastination, to describe the situation where you spend so much time making podcasts that it becomes another excuse not to write.

It’s hard to believe that just a few months ago we were discussing the possibility of making our own podcast. Already we’re getting ready to record episodes 16 to 20 and we’re making some fascinating friends along the way.

Thank you Theresa for telling us about Write Club – The Podcast.

Click here to listen to the (free) Write Club podcasts.

My interview with Write Club will be included in the podcast going live on the 19th February.

Theresa Stoker divides her time between Lancashire and the Peloponnese. She writes stage comedies and short stories, and is currently working on her first novel. She has won prizes for a play, a short story and most recently in the Daily Telegraph Just Back travel writing competition.