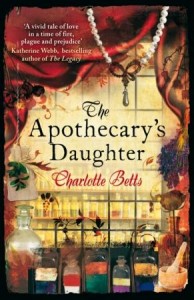 A lovely comment from Carole Matthews for The Apothecary’s Daughter. ‘A colourful story with a richly-drawn backdrop of London in the grip of plague. A wonderful debut novel.’

Praise for The Apothecary’s Daughter from Katie Fforde. ‘Romantic, engaging and hugely satisfying. This is one of those novels that makes you feel like you’ve travelled back in time.

Katie Fforde said in her adjudication of the RNA Joan Hessayon Award:
The Apothecary’s Daughter (Piatkus) This is a terrific,
involving historical novel set against the very real drama of the Plague Year and the Great Fire. Well-researched and beautifully written, it tells of one young woman’s struggle against the constraints of her time and gender, interwoven with betrayal, tragedy and loss, to find a measure of personal and professional identity and ultimate happiness.

Katherine Webb, bestselling author of The Legacy and The Unseen wrote, ‘A vivid tale of love in a time of plague and prejudice.’

Emma Pennell of Waterstone’s in Chichester gave The Apothecary’s Daughter an overall rating of 5 out of 5. She said,  ‘A debut novel from an exciting new voice in historical romance set in bustling, malodorous London at the time of the plague, just before the Great Fire of 1666.’ Couldn’t get enough of it!

I love the design of this book, which makes a change from headless women or vast expanses of flowing skirt. It is nicely designed inside too, with well-chosen period typography for the title pages and a good clear readable font.

You would not think London in the time of the plague would be good material for a romantic novel, but Charlotte Betts pulls it off superbly. The book tells the tale of Susannah, who, after the re-marriage of her father to the shallow and demanding Arabella, is forced to leave her erstwhile home to find marriage herself. As in all romances, the path of true love does not run smoothly, and in Charlotte Betts’s novel, there are obstacles aplenty – not least her new husband, Henry Savage, who turns out to have quite a few secrets Susannah doesn’t know about. The novel does not shirk from portraying the harsher realities of everyday life in the 17th century – slavery, the non-participation of women in society, and these aspects add depth to the story.

Unlike many other sketchily researched romances, this one really deserves the title “historical romance” as both aspects are in perfect balance.Vivid and engaging, the research is thoroughly done and succeeds in giving us an insight into this neglected period of English history, with all the smells of the apothecary’s trade, the sage, the turpentine, the juniper. If you are looking for a cracking good story, and to be transported to another age, you really can’t beat this.

From the moment I discovered historical fiction many years ago I have had a constantly thirst for well-written stories that will transport me back in time to a bygone era. My idea of a good historical read is one that allows you to take in all the period details, social nuances without holding up a page-turning story and The Apothecary’s Daughter ticks all those boxes and some.
Susannah’s problems start when her father unexpectedly remarries and she is jolted out of her contented position of mistress of the house and apothecary’s assistant. Susannah new-stepmother, who is only a few years her senior, makes life intolerable and it is soon clear that she must find a way of escaping the overcrowded household. Unfortunately, the only way for a respectable woman to leave her father’s home in the seventeenth century was through marriage. This suddenly becomes a more pleasant possibly when she meets Henry Savage, the cousin of the serious minded- and dedicated Dr Ambrose who frequents her father shop. However, Henry is not all he seems and it doesn’t take Susannah to realise that rather than being the answer to her problems marriage may be the start of them.
I won’t tell you any further as I don’t want to spoil the story. It is a thoroughly enjoyable read which will keep you enthralled until the very last page and I can’t recommend it too highy.l

I never tire of reading about this period in history in London.  Charlotte Betts has given the events of London during the plague and Great Fire a new angle.

Charlotte weaves the story of a young woman who has great qualities both as an assistant to her Apothecary father, and also by her very caring nature and her empathy for people regardless of their social status.  Susannah’s personal struggles as part of a growing step-family and her decision to take an offer of marriage as her only option lead her into an unhappy situation that she feels bound to endure. Susannah shows great courage in helping others at great risk to herself.

From the first chapter, I immediately felt transported into the Apothercary shop and was intrigued by the craft of mixing lotions and potions for the treatment of ailments in the 1600’s and the practises of doctors at that time.

The fear that was felt by Londoners, from all walks of life,  during the Plague and the Great fire had me gripped as this story took the reader into the quarantined homes of those affected by the plague.

A detailed and beautifully written novel that will stay with me for a long while.

I thought this book was interesting. I have never read anything about London during the 1664 period. It covers the period of the plague and great fire of London. It did not have many characters which was nice as I seem to have read a lot of books recently that have so many characters that it is difficult to remember who’s who. I would recommend this book to anyone who wants a light read with romance.

By creating a cast of vibrant characters and adding another theme focusing on the issue of slavery, Betts has breathed new life into the 1666 scenario. Susannah Leyton, the “daughter” of the title, is beautiful and intelligent but she is far from the cardboard cut-out that this description implies. Rather, she is the convincing central point around which a number of story strands spiral. The large cast of minor characters is equally well realised and entertaining. The descriptions of London are totally convincing. And Betts captures the desperation of people trying to live normal lives in a plague-ridden city, where the cries of “bring out your dead” are a daily occurrence. If you enjoy history with a dose of strong storytelling, this novel is worth the time to take in reading it.

Fantastic in the way it depicts how much women’s lives have changed since then and how lucky we are now. I recommend it for anyone who loves a great historical novel with love, betrayal, fear and the overcoming of great obstacles.

Reviews for Loves Me, Loves Me Not 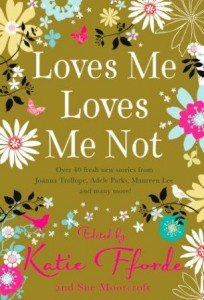 Loves Me Loves Me Not 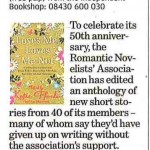 ‘an uplifting anthology of love stories from Britain’s leading romance writers, to celebrate the 50th Anniversary of the Romantic Novelists’ Association. Perfect for bed or bath-time.’