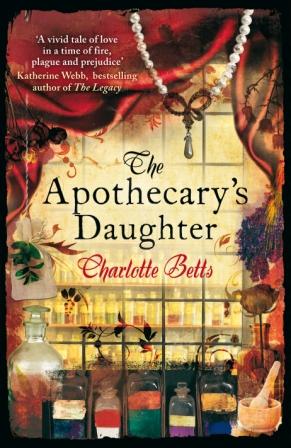 I am thrilled that the RNA announced yesterday that my soon-to-be-published novel, The Apothecary’s Daughter is a contender for the Joan Hessayon Award.  I’ve been invited to the RNA’s summer party at One Birdcage Walk, London on Wednesday 18th May 2011, where the winner will be announced.
The New Writers’ Scheme, which has been run by the RNA since 1962, is unique among professional writing associations. It aims to encourage fresh talent in the writing of romantic novels that reflect all aspects of love and life, contemporary or historical. Manuscripts submitted by unpublished writers are read by an experienced writer or editor who provides valuable feedback. Any manuscript that is subsequently published as a debut novel is eligible for the award. The eligible books are judged by a panel of experienced RNA members.
‘I would advise any aspiring writer to join the scheme,’ Lucy King, last year’s winner declared. ‘I found the depth and scope of the feedback to be invaluable. The encouraging comments I received really spurred me on.’
The award is generously sponsored by Dr David Hessayon, the gardening expert, in honour of his late wife Joan, who was a longstanding member of the RNA and a great supporter of the New Writers’ Scheme.
The contenders are:
Charlotte Betts THE APOTHECARY’S DAUGHTER (Piatkus)
Kate Jackson SECOND CHANCE (DC Thompson)
Molly Hopkins IT HAPPENED IN PARIS (Little, Brown)
Sally Clements CATCH ME A CATCH (Wild Rose Press)
Paula Williams A PLACE OF HEALING (My Weekly Pocket Novel)
I’m very excited by this opportunity, not only for a chance to win but to meet other writers at what promises to be a fabulous evening. Better look out my posh frock! Wish me luck and I’ll let you know what happens.
Labels: Joan Hessayon New Writers’ Award
Posted in Blog, News and Reviews