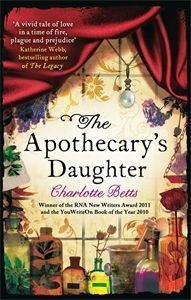 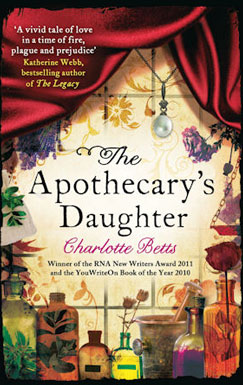 The book-signing in Waterstones, Newbury, went really well. The staff were helpful and friendly, making me tea and setting me at ease beside a table loaded with paperbacks of The Apothecary’s Daughter. I’d been a little nervous but found that it was easy for me to approach members of the public with my plate of home-made biscuits. Hardly anyone refused to try them when I explained they were called jumbals and made to a C17th recipe and were mentioned in the novel. From there it was easy for me to talk about the book and I met some very interesting people and sold a good number of paperbacks. Several members of my lovely writing group, WordWatchers, also called by to see how I was doing.

Once at home I was very pleased to find that I’ve had a another wonderful review for The Apothecary’s Daughter on the Bookthing website. http://www.bookthing.co.uk/2012/02/the-apothecarys-daughter/

The Apothecary’s Daughter is a book I’d been hearing good things about, and while it might not be a part of my usual set of genres, I wanted to give it a try.  I started it this morning and absolutely could not put it down.  When I’d finished, I had to let it sit for a while so I could think about it.  It’s actually a very hard book to review, not because of the subject matter or that it’s an historical romance but because there are just so many layers.

Charlotte Betts created a rich setting, a stark and vivid London in 1665.  A time of plague and the great fire of London, where death, disease and sorrow were part and parcel of daily life.  She then brought her characters to life with beautiful writing, and they fit really well into the time and attitudes of the period.

Eventually it’s an extremely sweet romance, but to get there, Susannah Leyton has to go through several adjustments and compromises.  At a time when being a strong woman was not considered an asset, let alone an intelligent one who wanted to use the skills learned from her father, it made her all the more special.  She isn’t a woman chafing at her lot in life however, she doesn’t want to change the world, she just wants to live in it as best she can.  The thought of marriage and children are abhorrent to her after watching her mother die horrifically in childbirth, but her choices are limited when her father remarries and the new lady of the house wants her gone.  Unable to find a suitable position, she finally accepts the proposal from the cousin of a close family friend.

I think the thing I liked most about Susannah is that once she has decided to do something, she does it with all her heart.  Marriage may not have been her first choice but she enters into it earnestly, despite her fears.  She is compassionate and caring and the author made it easy for me to empathise with her, through simple but evocative words.

The pace of the story is well measured and at times can be very grim and sad.  The cast of characters change frequently with Susannah as the focal point, but one remains with her all the way through and was the last person I expected to sneak into both our hearts.

This is not a bodice ripper historical romance, nor is it a story about a woman who wants to be equal to a man.

Al in all, a very good day!