In the Victorian and Edwardian eras, marriage was the pinnacle of most young women’s hopes and dreams.

A woman not only gained status upon her marriage but she avoided the dreadful fate of being left on the shelf. If she was lucky, a wife might grow to love her husband even if he’d been chosen for practical reasons.

Careers were rarely an option for a middle or upper class girl and she would rely upon her husband to keep her. Marriage also afforded the opportunity to release herself from the parental restrictions imposed upon her and to set up her own household. No doubt her parents also heaved a sigh of relief that their daughter was safely off their hands and they were relieved of financial responsibility, especially if she was one of several daughters. 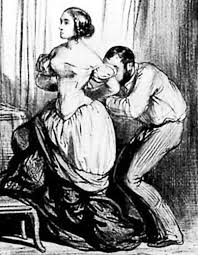 And then there was the marriage bed. Many brides were ill-prepared for their wedding night and, although it was a mother’s duty to inform her daughter of her marital obligations, embarrassment often meant the requisite preparation was confused or skimped. A man of the world with some sexual experience who loved his bride and took the time to treat her gently, had a far greater chance of a happy marriage.

A wife must dedicate herself to her husband’s happiness.

‘A woman’s highest duty is to suffer and be still.’ 1842 Sarah Stickney Ellis The Daughters of England: Their Position in Society, Character and Responsibilities. 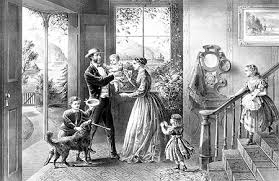 In exchange for her keep and her enhanced status, a wife must devote herself to her husband’s happiness. This was also the best way to ensure her own. She was expected to manage the children and servants competently, provide a clean and restful home and to ensure that appetising meals were served. She had to be a good companion and an accomplished hostess and must always defer to her husband’s wishes. Many young wives may have wondered if they had actually achieved the freedom they’d sought.

Upper class marriages were frequently arranged between families to preserve and increase power and wealth. A ‘good’ marriage didn’t necessarily mean the young couple were in love. Aristocratic couples normally slept in separate bedrooms and the husband would visit his wife when he felt amorous.  Once the wife had produced a son or two, it was understood, though rarely spoken of, that she might be free to have affairs. Her husband, of course, had probably never stopped. A man preferred affairs with a married woman because she wasn’t able to trap him into marriage and any child of their liaison might be quietly absorbed into her family. 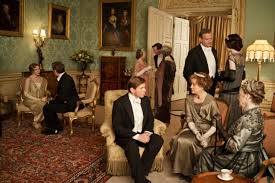 The Victorian and Edwardian ages were hypocritical in that lip service was paid to constancy to one’s spouse but, what was really paramount was discretion and apparent fidelity. House parties were a popular form of entertainment and it was accepted that there would be a certain amount of ‘corridor creeping’ in the night. The housekeeper helpfully ensured that name cards were displayed on all the bedroom doors to avoid any unpleasant surprises. The line between shame and respectability wasn’t judged on whether a wife had been unfaithful but on whether she was found out and thereby brought down derision upon her cuckolded husband.

Divorce was the ultimate disgrace and it wasn’t generally an option for most couples, except perhaps for the very rich. Until the 1857 Matrimonial Causes Act, it was almost impossible to obtain a divorce. According to Feminism, Marriage and the Law in Victorian England, 1850 – 1895, only about ten private acts for divorce were passed in Parliament each year. 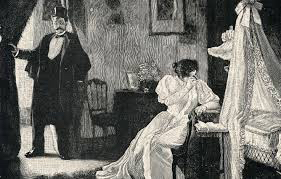 If a woman left her husband before obtaining a divorce, she lost custody of her children as well as any property she’d brought to the marriage.The Infants Custody Act 1839 allowed a mother to have custody of children under seven, provided she could prove herself of unblemished reputation. 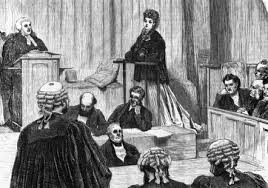 A husband was able to sue for divorce if his wife had been unfaithful to him only once but even his repeated acts of adultery weren’t sufficient grounds for a wife to divorce her husband. In addition, she had to prove cruelty, desertion, incest or bestiality. The couple had to stand up in court and state the reasons for the marital breakdown, which exposed their shameful secrets to the press and their friends. Even the innocent party would afterwards be shunned by society and the slur passed on to ruin their children’s prospects. If a marital breakdown became unbearable, the couple usually found it preferable to make quiet arrangements to live apart.

Whilst marriage was generally until ‘death us do part’, average life expectancy was only forty years of age. If a wife survived childbirth, however, she could expect to live into her sixties and seventies. Nevertheless, women often did die in childbed and the widower frequently remarried, not only for companionship but to provide a mother for his children and to keep his house in order.

Marriage has evolved over the centuries and expectations of the married state have shifted and changed, too. According to an old English proverb, marriages are made in Heaven. Many warring couples will surely agree that an unhappy marriage must be made in Hell? Nevertheless, hope springs eternal and for many second marriages, love will triumph. Hopefully.

If you would like to read Courtship and Weddings, Part 1 of Women and Marriage in the Victorian and Edwardian Eras, please click here.

The Light Within Us, the first in the Spindrift trilogy, explores the theme of women and marriage at the turn of the C20th.