Domestic Servants in the Seventeenth Century 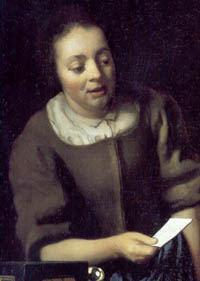 Detail from The Mistress and the Maid by Vermeer

All but the poorest households employed servants, who usually lived in, sleeping in attics, kitchens and basements. Pay was low but included their keep and often their clothing. Work was hard and hours long. A maid would often have to rise at two in the morning on a washing day so as to be finished by the evening. In the ‘middling sort’ of household the mistress often worked alongside the servants. In The Apothecary’s Daughter, I imagined Jennet, looking similar to the maid shown above from The Mistress and The Maid by Vermeer.

In 1668 Samuel Pepys and his wife, Elizabeth, had two maids, a lady’s companion, a cook and a coachman who sometimes doubled as a waiter. Samuel also had a boy,  dressed in livery, who walked behind him ready to run his errands.

Pepys was a fair employer but it was usual in those times to physically discipline the servants for perceived misdemeanours.

He writes in his diary:

Having from my wife and the maids complaints made of the boy, I called him up and with my whip did whip him till I was not able to stir, and yet I could not make him confess any of the lies that they tax him with . . . So to bed, with my arm very weary.

On other occasions he beat the boy with a cane or birch and once with a salted eel.

It became fashionable to have black servants, such as Emmanuel and Joseph in The Apothecary’s Daughter, who were seen as amusing status symbols, perhaps on a par with favoured pets.

In this way slavery was domesticated in aristocratic circles, as is shown by a number of portraits in existence of wealthy families with their elaborately dressed black servants.

I have been troubled this day about a difference between my wife and her maid Nell who is a simple slut, and I am afeard we shall find her a cross-grained wench.

Notices would regularly appear in the newspapers seeking the whereabouts of maids who had absconded taking with them their mistresses clothing and jewellery. 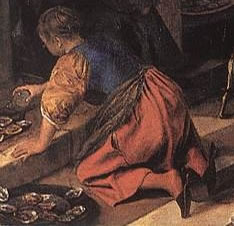 Mary Evelyn, writing to a friend in 1677 gave the following advice:

That if you have a faithful Woman or Housemaid, it will cost you little trouble. It were necessary that such a one were a good Market-woman, & whose Eye must be from the Garret to the Cellar; nor is it enough they see all things made cleane in the House, but set in order also; That if any Goods be broken or worn out they shew or bring it to her that she may see in what condition it is, that nothing be hid or imbezel’d. …. She should bee the first of Servants stirring and last in bed, & have some authority over the rest, & you must hear her & give her credit, yet not without your own Examination & inspection, that Complaints come not to you without cause. It is necessary also she should know to write and cast up small sums & bring you her Book every Saturday-night, which you may cause to be entered into another for your self, that you may from time to time judge of Prices & things which are continually altering.

‘a cook-maid ought to be of a quick and nimble Apprehension, neat and cleanly in her own habit, and then we need not doubt of it in her Office; not to dress her self, especially her Head, in the Kitchin, for that is abominable sluttish, but in her Chamber, before she comes down, and that to be at a fit hour, that the fire may be made, and all things prepared for the Cook, against he or she comes in, she must not have a sharp Tongue, but humble, pleasing and willing to learn, for ill words may provoke blows from a Cook’.

Unmarried women from a genteel background but with no means of support would often work as a ‘waiting woman’. This position, similar to a governess in later times, hovered somewhere between being a maid and a friend of the family. She would act as secretary, confidante, companion and lady’s maid, as her mistress required. She might be expected to sing or play an instrument to entertain her mistress and her friends, and to be a fine needlewoman. This was the position Susannah reluctantly accepted from William’s aunt, Mistress Agnes Fygge in The Apothecary’s Daughter.

Some servants became loved members of the household, staying for many years and finally being pensioned off or left bequests in their master’s wills.

One response to “Domestic Servants in the Seventeenth Century”