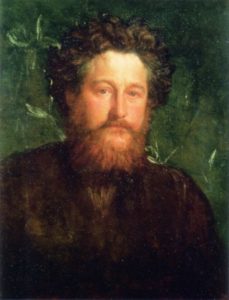 William Morris was one of the 19th century’s most well-known designers and a key figure in the Arts and Crafts movement.

Born in Walthamstow on the 24th March 1834, William Morris grew up at Woodford Hall in Essex. He enjoyed an idyllic childhood in the countryside, showing an early interest in the natural world, architecture, storytelling and romantic historical literature. He went up to Oxford to read Theology. His friend, painter Edward Burne-Jones, introduced him to a group of students known as The Brotherhood, who were fascinated by stories of medieval chivalry. The social commentaries of John Ruskin, Thomas Carlyle and Charles Kingsley opened Morris’s eyes to the deep divisions in society and, as a consequence, he decided not to take holy orders.

Morris went to work with George Edmund Street, a leading Neo-Gothic architect of the day but left after a few months to begin a career as an artist. Through Burne-Jones, Morris met Dante Gabriel Rossetti, a central light in the Pre-Raphaelite movement and they worked as part of a team on a series of murals at the Oxford Union.

made her an ideal model for the Pre-Raphaelite brotherhood. Morris commissioned his friend Philip Webb to build Red House for him and his family in rural Kent, initially intended to house a craft-based community that would be ‘medieval in spirit’. Morris, Jane and their artist friends spent two years decorating and furnishing Red House with murals and hand decorated textiles. 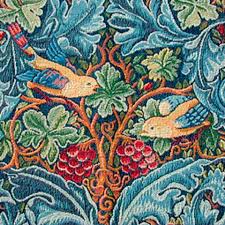 The limitations of a small rural workshop resulted in Morris moving to Bloomsbury. He set up Morris, Marshall, Faulkener & Co in 1861 with Burne-Jones, Rossetti, Webb and other artists and craftsmen espousing the ideals of beautiful handmade goods, swimming against the tide of the poor quality workmanship of Victorian manufacturing. The firm sold tapestries, wallpaper, stained glass windows, furniture and fabrics designed by Morris and became wildly fashionable, profoundly influencing interior decoration of the time. Morris took over the firm in 1875 and renamed it Morris & Co.

In 1871 Morris and his family rented Kelmscott Manor in Oxfordshire. (See my post about

Kelmscott Manor here) He published a series of translations of Icelandic sagas and one of his epic poems, The Earthly Paradise carried an anti-industrial message that established him as a foremost poet of the day. He embraced Marxism and became a committed social activist. The coach house at Kelmscott became the meeting place of the Hammersmith Socialist League, where Peter Kropotkin and George Bernard Shaw lectured. 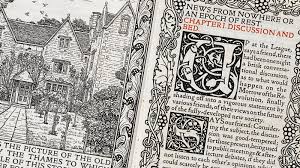 In 1891 Morris formed the Kelmscott Press to publish limited edition, illustrated books. The Kelmscott Chaucer was finished shortly before he died.

Multi-talented, Morris’s work as a craftsman, artist, writer and socialist left behind a legacy of artistic excellence still admired and sought after  today.