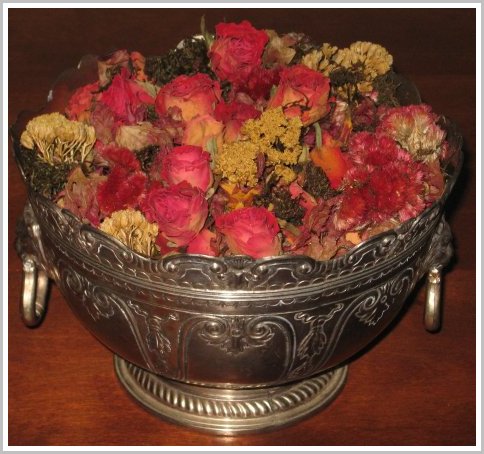 Traces of rose-petal pot pourri have been found in excavations of ancient Egypt and making sweet-scented pot pourri in the still room was a pleasurable task for the seventeenth century housewife.

The still room was an important part of the home where the women preserved their herbs and flowers by hanging them up in bunches to dry. They were later used to make scented waters, salves, teas and tinctures.

Potpourri translates as rotten pot and later became known by the more attractive name of sweet jar. Flowers were gathered from the garden, starting in the spring and continuing through the summer. They were layered in a jar with coarse sea salt and often began to ferment. In the autumn, spices were added, together with ground orris root to fix the fragrance. The finished product was stored in a jar with a perforated lid, often placed close to the fire to allow the warmth to scent the air with the perfume of a summer garden.

An alternative type of potpourri is a dry mixture of flowers and spices, perhaps more suited to modern taste. Ingredients for this are a mixture of scented, dried petals and small flower heads, lavender, allspice, cinnamon bark, cedar, cloves, mint, orange peel and rosemary. Cedar could be added as this is a natural moth-repellent.

Here is a recipe for rose and lavender potpourri.

Combine all ingredients in a large jar. Close tightly and store in the airing cupboard for six weeks. Add a few drops of rose oil and stir gently before placing in open dishes. Decorate with whole dried rose buds, if wished.