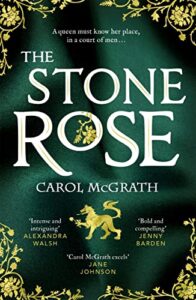 The Stone Rose is, in my view, the best novel in Carol McGrath’s Rose trilogy and a fitting finale. It’s a richly descriptive account of a royal household in medieval times and follows the story of Isabella from her marriage at fifteen to King Edward II to the end of her life.

Agnes, a stonemason’s daughter receives a mysterious message from the disgraced Queen Isabella speaking of a task only Agnes can fulfil. Much has been whispered of the conflicts in Edward II’s and Isabella’s marriage. Her greed and warmongering. His unspoken love for male favourites. The truth is revealed. But can either woman choose independence, follow their own desires, and survive?

From the beginning, Isabella was determined to be a dutiful queen and a force for good. She loved her new husband and vowed to always be faithful to him and to provide him with the sons he needed to ensure the succession.

It isn’t long before she discovers she must share his affections with his male favourites. Her husband is a weak man, pleasure-bound and easily swayed. The Duke of Lancaster, the king’s uncle , together with his supporters, deem his behaviour unacceptable and demand that he banish his favourites. When Edward refuses, they take matters into their own hands and execute the king’s favourite, Piers Gaveston. Edward never forgave his uncle for the execution of Piers, the love of his life. For a while, he and Isabella are happy again with their growing family and he seeks her counsel in matters of state.

Isabella forms close friendships with the Clare sisters, one of whom is married to the loathsome Hugh Dispenser. Hugh weasels his way deep into King Edward’s affections. He ruthlessly destroys any rivals and feathers his own nest by confiscating the lands and properties of those he destroys, leaving their wives and children in penury.

Isabella discovers that the once-loving Edward is increasingly alienated  from her by Hugh’s poisonous lies and a battle of wills between the Isabella and ever more powerful Hugh Despenser only results in her humiliation. Hugh’s wife, Eleanor is one of Isabella’s ladies-in-waiting and acts as his spy.

I pitied Queen Isabella but admired her patient and serene demeanour whilst plotting Hugh Despenser’s fall from grace. She knew she must remove his influence upon the king to restore harmony to the land. Those who know the history of this era will remember that Isabella achieved her objective of securing her son’s succession to the throne but the story doesn’t stop there. There is a truly astonishing final twist to the story.

The Stone Rose is an absorbing and fascinating story for lovers of medieval biographical fiction.