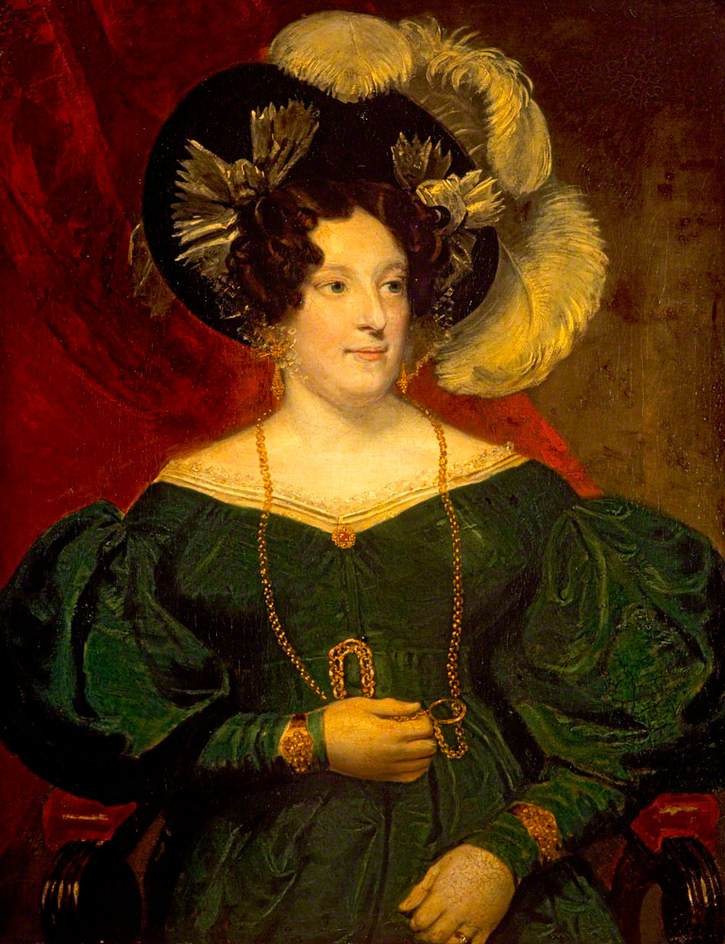 Learning about history is as important to me as writing the novel. The process of self-educating is exciting because I can research subjects that really interests me. It was in this way that I came across Princess Caroline of Brunswick, the estranged wife of the Prince Regent, later King George IV. The more I read about her extraordinary and tragic life, the more I knew I had to write about her.

And so The Dressmaker’s Secret came into being.

Whilst Caroline isn’t the main character in the book, the factual events of her life frame the plot for my heroine, Emilia, when she becomes a member of Caroline’s household in Italy. Later, Emilia travels to England to find her lost family and unravel the mystery of priceless stolen paintings.

In 1794 Princess Caroline of Brunswick was twenty-six years old and longing for marriage and children. In London, the Prince of Wales’s extravagant lifestyle had plunged him into severe debt but Parliament promise to increase his allowance if he would marry his cousin, Caroline.

Lord Malmesbury was sent to Brunswick as the Prince’s envoy to arrange the marriage treaty. He reported that blonde and blue-eyed Caroline had ‘a pretty face, tolerable teeth’ and a ‘good bust’. He was, however, perturbed by her free and easy manner.

The lively Princess was impulsive, indiscreet and careless about her toilette and he took on the challenging task of preparing her for the cool formality of the English court. 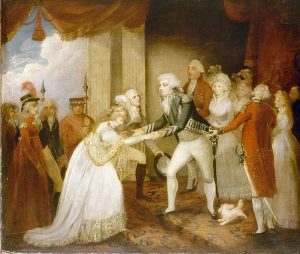 The Prince and Princess met for the first time three days before their wedding.

The Prince of Wales appointed his mistress, Lady Jersey, as Caroline’s Lady-in-Waiting.

Caroline, wearing an unflattering dress that Lady Jersey provided for her, kneeled to the Prince, who formally embraced her. He recoiled, called for his equerry to bring him brandy and then left the room.

Affronted, Caroline commented that her intended was fatter and not as handsome as his picture. Later, it transpired that Lord Malmesbury’s efforts to teach the Princess to be particular about her personal hygiene had failed. 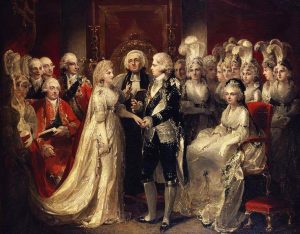 The Prince of Wales was agitated and by the evening had consumed so much brandy he collapsed by the fireplace in the bridal chamber. Despite this, nine months later Caroline gave birth to Princess Charlotte.

The unhappy marriage was made worse by the malicious gossip spread by Lady Jersey. Regardless of his own infidelities, the Prince was desperate to divorce his wife but the government wouldn’t sanction it without proof of Caroline’s adultery.

Three days after Princess Charlotte’s birth the Prince drew up a will leaving all his property to Roman Catholic commoner Maria Fitzherbert, whom he had married illegally and without royal permission ten years before. He referred to Maria as ‘the wife of my heart and soul’ and to ‘the woman who is call’d the Princess of Wales’, he bequeathed one shilling. 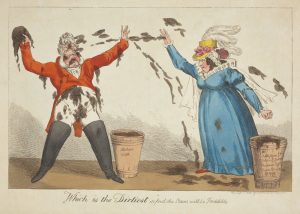 The press took Caroline’s side against the already unpopular Prince of Wales. The couple separated but Caroline was not provided with a suitable allowance or a home. She rented a house in middle-class Blackheath, where she held some kind of a court, encouraging politicians and society figures to visit.

The Princess hosted eccentric and sometimes wild parties, entertaining visitors while she sat on the ground eating raw onions or romped on her knees on the carpet with Princess Charlotte.

She indulged in flirtations with a number of her guests and she formed intense, but often short-lived, friendships without regard as to whether they were appropriate.

Caroline became the protector of seven or eight orphan children, supervising their education.

Her fondness for children and for irresponsible jokes lead to a national scandal. She adopted a baby and teased her friend, Lady Douglas, by pretending that she had given birth to the boy herself. Later, vindictive rumours were spread about the purportedly illegitimate baby.

A secret committee was set up by the King, called The Delicate Investigation but, to the Prince of Wales’s chagrin, it was proved the baby was not Caroline’s natural child and there were no grounds for divorce. Caroline, however, was left with a stain upon her character. 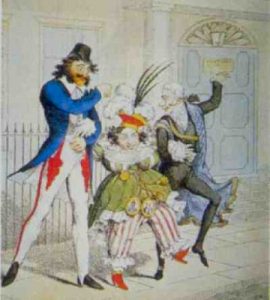 In Milan she hired a courier, thirty-year old Bartolomeo Pergami, who became indispensable to her. Following a sojourn at Villa d’Este by Lake Como, they set off on extensive travels abroad. Caroline elevated Pergami to chamberlain and it was rumoured that he was her lover. They travelled back to Italy, eventually arriving in Pesaro in 1818.

Her own worst enemy

Caroline was impossibly unsuited to life as a Princess. Although her common touch was popular with the people, her sometimes outrageous behaviour made her a painful burr in the side of the Royal Family.

Despite that, she was courageous and loving. She tried to live for the moment, squeezing as much joy as possible into a life lived under difficult and often extremely unfair circumstances. 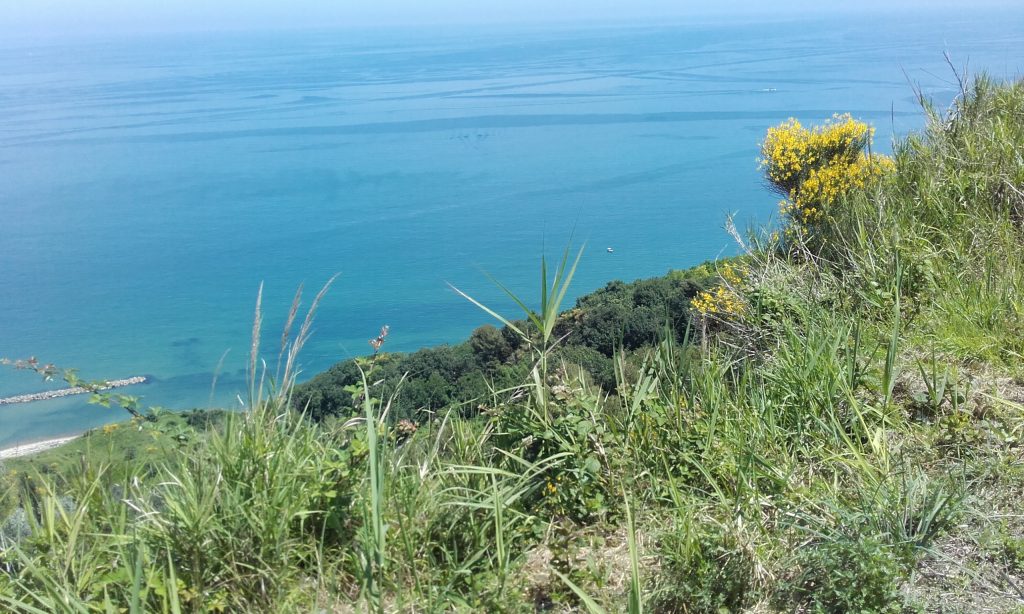 Whilst writing The Dressmaker’s Secret, I travelled to Pesaro, a small town on the Adriatic coast. I walked on the Monte San Bartolo looking for the Villa Caprile and the Villa Vittoria where she lived, ambled around what was left of the town walls, dipped my fingers in the fountain in the Piazza del Poppolo and swam in the Baia Flaminia where she liked to bathe.

All the while I had the feeling that Caroline was looking over my shoulder and smiling at the places where she had been happy. 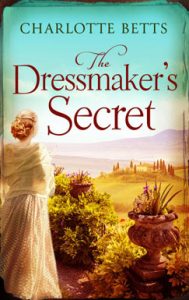 The events of the Princess’s life from 1819 to her death in 1821 are outlined in The Dressmaker’s Secret.

The Dressmaker’s Secret is available on e-book here.

The paperback is available for preorder and will be in the bookstores on the 9th November 2017.